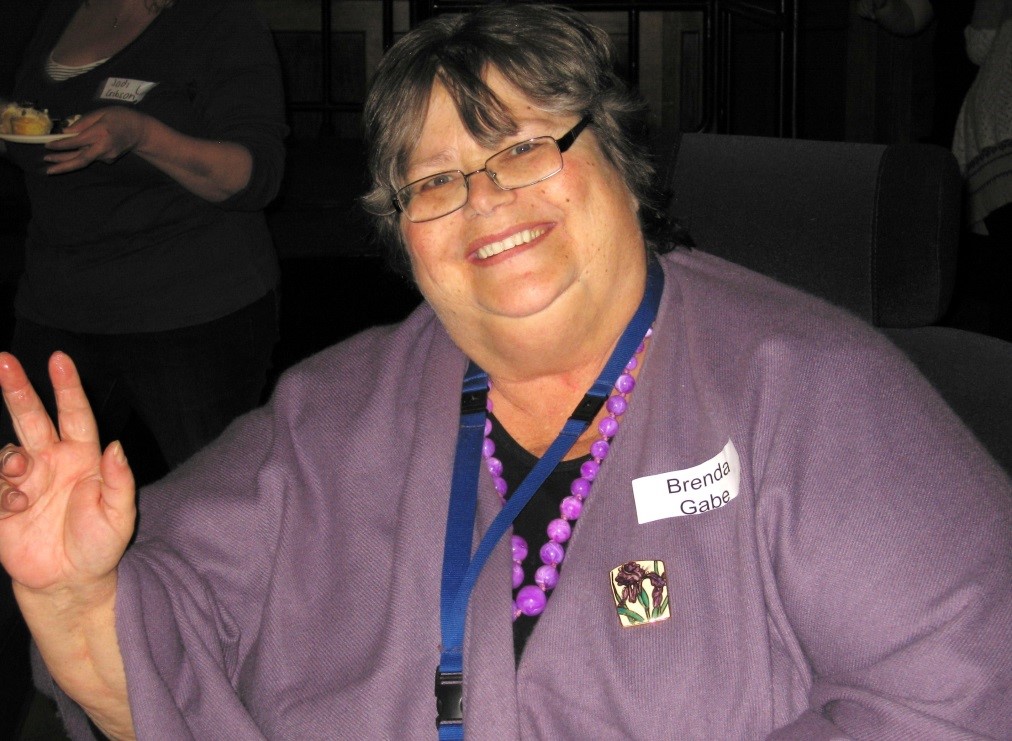 Supported by Dr Helen Sykes, the Brenda Gabe Biennial Leadership Award is a WDV initiative that celebrates leadership amongst Women with Disabilities in Victoria.

The Award is presented every two years. In the year the Award is to be presented, WDV will invite members of the community to nominate a woman with a disability, or a group of women with disabilities, for the Award.

We encourage women with diverse backgrounds and/or life experiences to be nominated.

The Brenda Gabe Leadership Award will next be presented at this year’s AGM on October 27, 2021.

The winner of the Award receives $2,000 towards a capacity building project, or professional development. It is expected the winner will be able to demonstrate the award money was used appropriately, and provide a report the following year on what they’ve done since winning the award.

Brenda Gabe was a much loved and respected member of Women with Disabilities Victoria.

Brenda wore many hats; she was a school teacher, psychologist, champion swimmer, businesswoman, wife and mother.

After being diagnosed with multiple sclerosis (MS) in 1994, she became involved with Mulgrave Neighbourhood house and successfully completed the Leadership Plus course in 2007.

Brenda went on to become a strong and committed disability advocate, perhaps one of her most enriching roles. Amongst her numerous commitments, Brenda made time to represent Women with Disabilities Victoria on various committees, forums and conferences. She played a leading role on disability-related campaigns including making both housing and public transport more accessible and preventing violence against women with disabilities.

Making a positive difference for women with disabilities was very much at the forefront of all of Brenda’s activities. Caption: A close up photo of Elena. They are a young Indigenous person with a ruddy complexion. They are gazing at the camera with a closed mouth smile. They have green eyes and curly auburn hair. They are wearing a white collared shirt.

As a young, disabled Indigenous person who passionately engages with disability justice, abolition, and Indigenous philosophies in their day-to-day practice, Elena’s leadership and voice continues to encourage other young Aboriginal and Torres Strait Islander women and gender diverse people to engage with the disability community. Elena has produced the Mob Dreaming Up: Yarning Sick, Disabled Realities broadcast. They have writing in multiple forms across publications; and has presented as part of the Disability Justice Network in the Emerging Writers Festival. [Photo: Shakira Hussein.] Caption: Two women sitting at a table. Shakira is on the left with a bunch of flowers in front of her. The lady sitting next to her is smiling and holding Shakira’s certificate to the camera.

Shakira has written disability-related articles for Crikey and The Saturday Paper. Her Griffith Review article ‘Nine Elevenitis’ was selected for ‘The Best Australian Essays 2011’. Her essay on raising her daughter as a single mother while having MS for the book ‘Mothers and Others’ was republished in the Good Weekend Magazine. Shakira is a much sought after speaker and was recently invited to speak at the International Summer School on Disability and Law at the National University of Ireland. 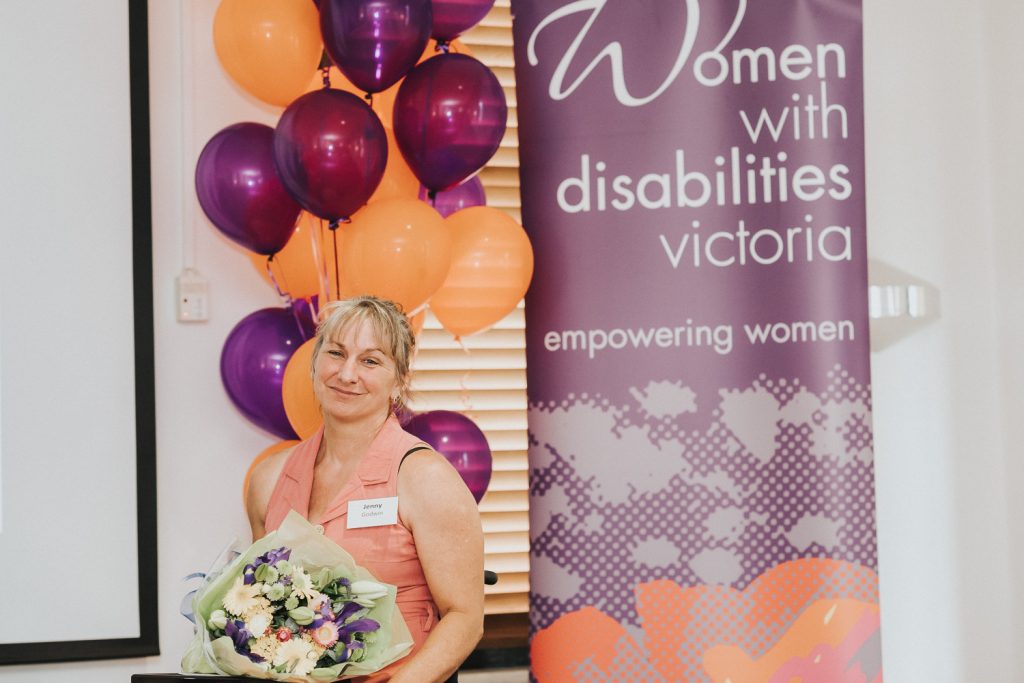 [Photo: Jenny Godwin.] Caption: Jenny sitting in front of a WDV banner and orange and purple balloons. She is smiling and holding a bunch of flowers.

Jenny is a committed advocate for women with disabilities and driver of transformative change in regional communities. Jenny’s work has informed and strengthened partnerships to include women of all abilities.

Her commitment to equality, empowers rural women living with disability and communities to enable access and participation for all. [Photo: Colleen Furlanetto] Caption: Colleen smiling and holding her certificate. She is sitting in her wheelchair, and is wearing a bright red top, with a white ribbon to symbolise stopping violence against women.

As the newly elected Mayor of Strathbogie Shire, Colleen Furlanetto is committed to bringing change at all levels for women in the areas of disability, violence and health care.

She chairs the Municipal Association of Victoria Prevention of Violence against Women Network.

Colleen is also a participant in the acclaimed Williamson Leadership Program.

Colleen recognises we are in a time of significant social policy change offering many people with disabilities choice for the first time. She has dedicated mush of her time to network and be a representative on committees and associations so she can be a voice for women with disabilities. [Photo: Jody Barney] Caption: Jody, standing, smiling and holding her certificate. She is wearing a black dress, with a long colourful scarf that almost reaches the ground.

Jody has made enduring and valuable contributions as an Australian Indigenous leader, and as an advocate for people of all abilities.

She is the first Deaf Aboriginal woman to present at local, state, national, and international levels on the empowerment of Aboriginal people with disabilities.

She was actively involved in the National Congress process, the First People’s Disability Network (Australia) and the International Deaf Native Gathering.

Jody models leadership to others in the Aboriginal, and disability communities, as she demonstrates a holistic approach to strengthening leadership and self-determination. 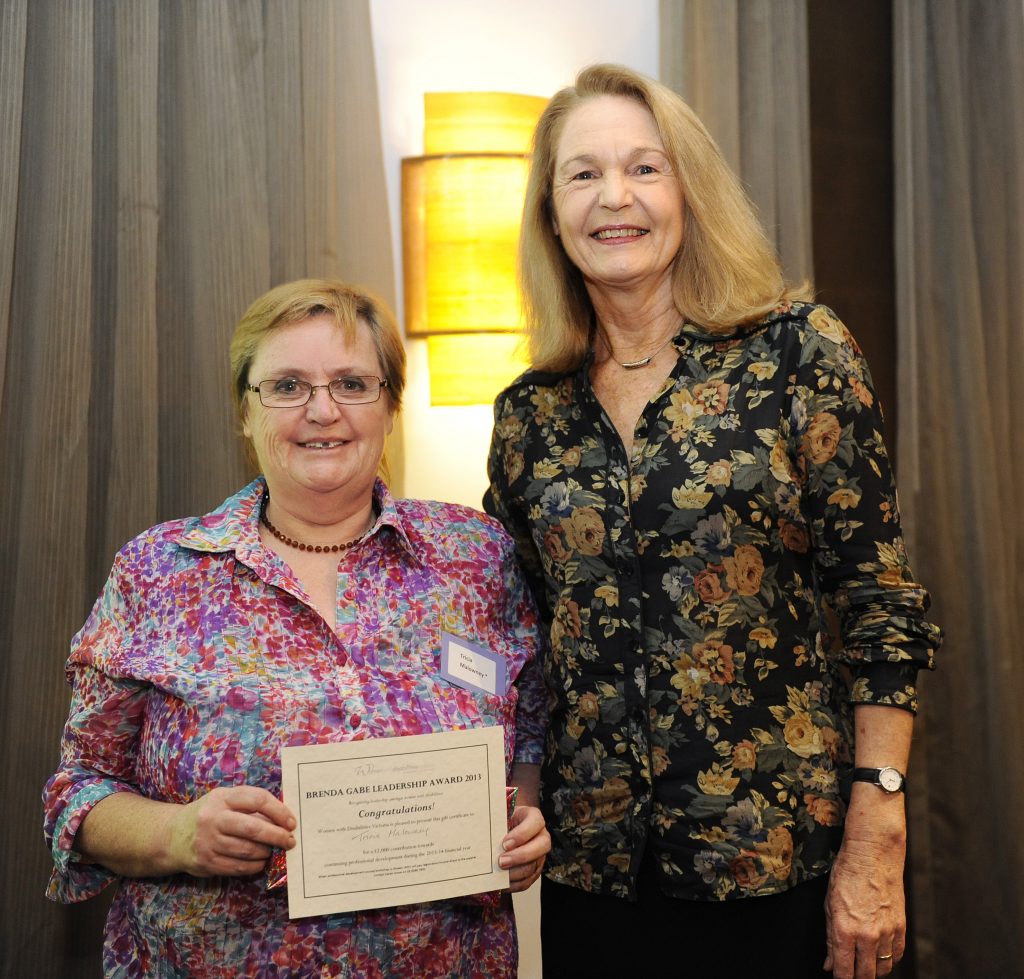 [Photo of Tricia Malowney] Caption: Tricia smiling and holding her certificate. She is standing next to Dr. Helen Sykes. Both are wearing floral patterned shirts.

Tricia is a highly respected advocate for people with disabilities who has worked at state, national, and international levels.

Since retiring from a middle management position with Victoria Police, she has contributed to and led in a formal capacity boards, committees, and councils, championing the rights of people with a disability. This includes being the first person to Chair the Royal Women’s Hospital Disability Reference Group.